Step your game up with trail running

It’s like going off piste, only in summer. The trail running-trend keeps on growing, and Vindelnfjällen offers every possibility to try it on your own level, for example on Kungs- or Drottningleden.

Trail running is drawing more and more people out into the terrain. Compared to traditional running on asphalt or exercise tracks, trail running gives a greater overall experience.

This form of exercise “began” across the pond, even if we have been running in terrain for a long time in Sweden. But as the urban lifestyle has taken over in many ways, a new generation has discovered the benefits of getting out into the forests and mountains.

Competitions and training camps focusing on trail running have also aroused a lot of interest in recent years. Fjällvindenterrängen, which runs along the Drottningleden trail between Laisaliden and Hemavan, is just one of many trail running races that are now increasing in popularity.

When training, it is practical to just choose a suitable trail or to simply go out there and see where you end up. Trails, paths and other more easily run parts can be mixed with untrodden and hilly terrain. Kungsleden is a perfect baseline to start out from. In addition, there are cabins and wind shelters to duck into if needed.

The regular run around the town or neighbourhood will most often lead to little more than getting into slightly better shape, while trail running becomes an everyday adventure. Most of the time, you will be out for a longer period of time, and one of the most important ingredients is to stop for a moment from time to time. Listen to the birds in the trees, look at the twin calves and the elk walking along the mountain side, feel the warm brush against your skin and take in the scent of globeflowers in bloom. The greatness lies in the simplicity of it all. Just put on a pair of shoes and bring only what you need for this run.

And trail running also gives you a more comprehensive workout. You have to lift your legs higher, angle your joints and activate larger muscle groups. Hilly and technical terrain also allows for something similar to interval training. Since you are often running on softer ground, it is also less of a strain on your knees and feet.

Klas Nilsson from Skellefteå is an elite skier competing in the endurance race world cup. He has covered many miles in the Swedish and Norwegian mountains, and trail running has always been part of his summer training. Other than being a trained physiotherapist, he runs the company Northsport, which for many years has been selling equipment for this particular type of running. He says that you can of course use your regular running shoes, but if you are going to run a little more, they will get worn out very quickly.
“We advocate getting as close to a zero drop, meaning a low heel on the shoe, as is possible for the runner. This gives increased control and stability, and reduces the risk of spraining your ankle,” says Klas.

He argues that a shoe with a good, textured, slightly more rigid sole is better for a rocky terrain, while a softer, thinner and more flexible sole works for nature trails etc.

Otherwise, your regular workout clothes are fine if you want to try trail running. As with any sport, there is now an abundance of equipment for trail running, but let’s save that for another time. However, if you are going to run on the mountain, it is wise to bring a small running backpack with fluids, some provisions, a first aid kit and extra layer of clothing as well as some form of orientation equipment.

It is also important to start at an appropriate level. If you have only ever run on asphalt, you should start out in easier terrain, such as a lit track, and then gradually move on to more technical terrain. It is also important to keep your head up in order to see all the great nature around you, but also to figure out where to go. An experienced trail runner will read the terrain, without even thinking about it, and knows far ahead which stone they want to tread on and what roots to avoid. When running downhill, you should hold back as little as possible. When you try to slow your pace, you increase the risk of slipping, but you obviously cannot let go of control completely. Everything in moderation.

For those who want to broaden their experience, it is also possible to fly out of Hemavan Tärnaby and run back. This concept has been developed by TopHeli and pilot Oskar Fahlgren. Oskar himself likes to go on both longer and shorter runs in the area, often with his fishing pole strapped to his back as an added bonus. With TopHeli, you choose the length of the run yourself, five kilometres or fifty or some other distance that suits you. Ten minutes in the helicopter gives you 3–4 hours of running and allows you to reach locations that you would not get to otherwise.
“The great mountain areas around Hemavan give you some amazing views as you run across mountain peaks and down the slopes, which also supply you with fresh running water during the run,” says Oskar.­

A few things to remember to stay safe during longer mountain tours:

A few suggestions for a Heli Run:

The run from Marinstugan/Vallentjåkke to Laisaliden offers magnificent views as it stretches across the Murtsert peaks and different mountain lakes. Distance of the run is approximately 10 kilometres with a lot of downhill running, and you also pass by Drottningleden towards the end.

Syterstugan – Laisholm: A great run along Kungsleden, which takes you through the long mountain pass of Syterskalet, with the north and south Syter peaks on either side of the lush, green pass. The run also takes you through the Hemavan skiing area before finishing along Drottningleden. Distance of the run is approximately 25 kilometres in varied terrain. 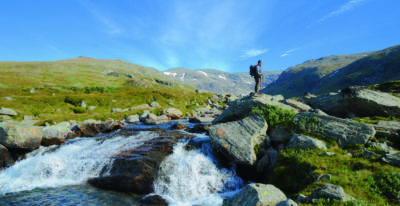 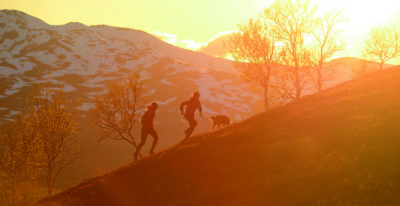 Get your heart pumping 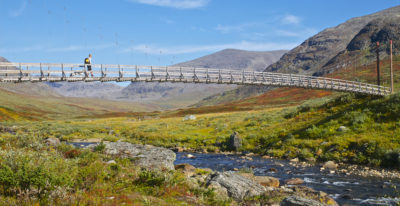 Experience the mountain on foot